In an earlier post, I alleged a begrudging reconciliation with my creeping-up, old age. An acceptance of gravity's negative effect on my once buoyant body parts. A deference to time running its natural course.
But the winds of change have struck again. Now I must vent my spleen because my antiquity has plunged to alarming new lows, causing an intestinal disquietude, bent on venting my colon.
Yes, folks, I am going to go there. It's time to air it out.
In my late twenties, a male companion of mine commented about his amazement with females' ability to never pass gas. He noted his reverence for our stubborn resolve to withhold airing our discomfort. He joked about his anxiety for our collective well-being, his fear that at any moment a woman in his company might combust like a shaken can of soda, setting off a contagion of eruptions among the other females, like the exploding of a string of firecrackers. One woman after another blown to bits by her own obstinate decorum.
He wasn't exactly right. But back then I could hold it in with ease.
That was then, this is now.
Maturity has ripened me, I admit. The vapors waft up, pungent and fermented. Mustered into the sweet, horseradish-y aroma akin to mustard gas. And always, always, at the most inopportune times.
For instance, at the office, speaking with a co-worker, I feel the pressure building. I grasp for a piece of paper to crackle in my hand, to disguise the noise. No paper in reach, I tap my fingernails on a counter top or wall, a deluded confidence in my ability to conceal my defective social graces.
But the worst, the absolute worst of it, is during my massage sessions. Face-down on the table, my tummy gurgles. The magma brewing in the caldera. I squirm. I tense. I clench. Actions all counter to the purpose of being on the table in the first place.
Perhaps, rather than struggling against it, I should just do the massage therapist a courtesy, warn her to step away. Like in Army basic training when shooting a grenade launcher, we were taught to warn those behind us with the phrase 'back blast area all clear.' Would that not be an appropriate way to protect my unsuspecting masseuse, who, as bad timing would have it, always seems to have her face directly above the escape hatch. I should probably tip her better.
Recently I made chili for dinner on a Friday night. The following week, my husband suggested I eat the leftover chili for lunch...on a work day? Inconceivable. When it takes so much effort to control it as is, I'm certainly not going to egg it on.
I suppose I should contact that old friend of mine and give him the peace of mind of knowing there's no longer much threat of spontaneous combustion. In fact, I've read that flatulence is a sign of good health. That being the case, I fear I may be immortal.

I was about seven when it occurred to me something about this Santa Claus story just wasn't adding up.
First, we didn't have a chimney in our house. How was Santa making entry? And if it was, in fact, that easy to get into our house in the wee hours of the night, what was keeping other, more duplicitous, professed do-gooders from prancing right in.
Second, one year earlier, my extended family had gone to great lengths to put on the blitz with a Santa Claus showcase on Christmas Eve at my Grandma and Grandpa's house. Santa jingle-jangled into the family room, sleigh bells clanging, sack slung over his shoulder. My two cousins, my sister and I stared, awestruck.
We each had a turn on his knee, receiving a gift and a candy cane. Camera flashes burst all around us. The clicking, eight-millimeter movie camera, with its retina-scorching light bulb, recording it, for all time, in Technicolor.
Only a few minutes later he dashed away, dashed away – through the swinging kitchen doors. I had just a moment to consider how none of what had just happened jibed with Santa's prescribed Christmas Eve agenda before the grown people in the room hurried us children to the plate glass window in the dining room, carrying on maniacally, pointing and gesturing to the pitch dark, backyard. “Do you see him? There he goes. Look there's his sleigh.”
What the dickens were they all talking about? A born skeptic, my eyebrow arched like the toe of an elf's boot, I peered out the window, but saw no creature stirring, not even a mouse. But I did smell a rat.
So the next year, I devised a plan. I was going to solve this mystery once and for all. I would stay awake all night, listening. Listening for reindeer paws, tinkling bells, or a deep, baritoned Ho Ho Ho.
I awoke the next morning, certain I had dutifully accomplished my mission. I had my proof. Or lack thereof. I'd been fed a bowl full of jelly long enough, and I was going to set the record straight.
Gifts opened, Dad sat at the Kimball organ, playing a tune. I leaned against the top of its cabinet, preparing my case. Deciding to get right to the point, my stubborn, little chin jutted out, I declared, “I stayed awake all night last night, and I never heard Santa come.” Heh heh! Whatdaya got to say about that?
My father never missed a beat, played his song unperturbed, and met my accusing stare. “Sounds to me like you need a nap.”
Wha?! I had wandered into dangerous territory. Being told to take a nap on Christmas Day? Quick as a missile, I had to get out of sight. So away I did fly like the down of a thistle.
My father had won this round, he was clever and cunning. I made up my mind though... next year, I'd dissect the Easter Bunny. 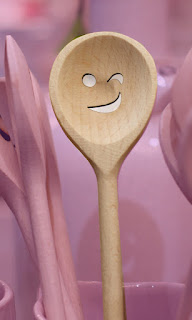 I have a vague memory of being loaded into the ambulance, my mother, frantic (perhaps that's too strong a term – mildly unnerved, maybe), climbing in behind.
I'd been poisoned. And fearing for my life, Mom called the squad to whisk me away to the emergency room.
Poisoned? You ask. My goodness. You say.
My mother told the story this way...I had licked an anteater behind the couch.
I cannot begin to convey the monumental amount of puzzlement this information generated in my tiny brain – for many years.
Why did we own an anteater? What was his name? Why did we keep him behind the couch? How come I'd never noticed him there before?
Confident in my mother's description, I tried to picture the scene, to remember this intimate encounter. It seemed like something I wouldn't forget.
But the effort to remember only provoked more questions. What part of the anteater did I lick? Was it his snout? Was it his rear? If I had licked somewhere else would there have been a less toxic outcome?
Knowing anteaters have enormous tongues, I was also compelled to wonder, did he lick me back? Perhaps he, in fact, licked first, causing me to politely return the favor. Maybe we were just comparing our tongue sizes – an innocent case of I'll show you mine if you show me yours.
I tried in vain to decipher the mystery and was quite a bit older by the time I asked my mother to explain it again because I couldn't figure it out.
I'm sure, dear reader, it doesn't take a terro card to clearly see the truth of this story. No need for clairvoyance. My mother had been willfully imprecise with the use of the term anteater, but I'm forever grateful for it. For as a story teller, when presented with a chance to make a mountain out of an ant hill, you have to get in your best licks.